Scale & policy: How news shapes your views on COVID-19

In two years since the first cases of COVID-19 were detected, virus-related stories have dominated the news. Patterns in media coverage play a major role in establishing the “default” ways of framing major issues — through not only what is said, but how it’s said, and what’s not said. If news users don’t have tools to fully reflect on what’s happening beyond the referential content, these effects can be insidious.

While running an errand at a local drugstore on Friday, one of the authors of this article, a discourse analyst and media researcher who has also become a COVID communication scholar by accident, spotted the front page of the local newspaper shown in the image below. 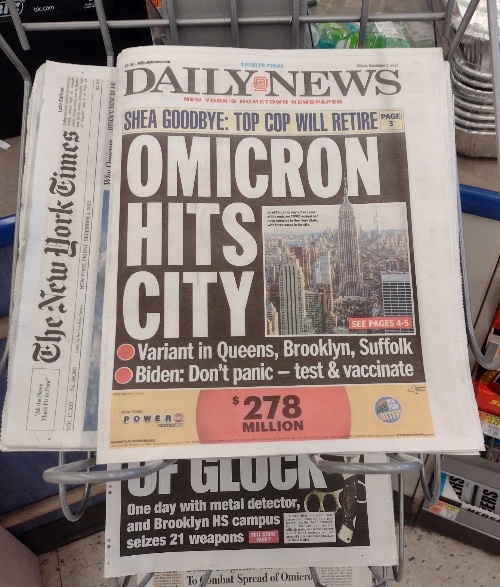 What is this page communicating? How does it encourage its audience to think about the virus?

A reader can tell what the most important information on the page is by the sequence, the font size, and their overall familiarity with newspapers as a genre. In this case, it’s “OMICRON HITS CITY.”

Let’s take it one word at a time:

Omicron: Beginning with the word ‘omicron’ (i.e. the omicron variant of COVID-19) focuses readers’ attention on it as the newest or most important part of the headline.

Hits: The verb ‘hits’ carries a lot of weight. First of all, it treats the omicron variant as agentive: rather than being ‘found’ or ‘detected,’ omicron is depicted as an agent. And not just any agent -- omicron doesn’t ‘arrive in city’ but ‘hits city.’ Transitive verbs, which take direct objects, tend to be perceived as more active than intransitive verbs like ‘arrive.’ And this verb depicts a violent action. The present-tense and strength of the verb also suggests recency, which may be illusory: as one of the authors on this article observed on Twitter, “the event being reported on is the movement and arrival of Omicron, as opposed to having reached the point of sufficiently testing in order to find a variable that may have been present for some time already.”

City: By convention, headlines frequently omit articles. It’s safe to assume this headline is not informing us that omicron has hit just a city, but rather ‘the city.’ How is a reader to know which city is being referred to? As it happens, ‘the city’ is what’s known as a deictic: what it refers to depends on context that is not strictly linguistic. If you’re in Gary, Indiana, ‘the city’ is Chicago. If you’re in Cherry Hill, New Jersey, ‘the city’ is Philadelphia. In this case, ‘the city’ refers to New York City. There are at least three hints on this page alone:

The choice of object also makes a claim about scale. When this page went to press, only 5 cases of the omicron variant had been detected in New York state, about one case for every 4 million people in the state. Speaking on the scale of the city, rather than individual cases, implies (almost certainly correctly) that these cases are unlikely to be isolated incidents.

[Silence]: Last but not least, adverbial modifiers are conspicuous in their absence. In particular, there is no way to ascertain from this headline that the news item was in no way surprising. Since the unmarked (roughly, default) assumption is that news items are unexpected, headlines typically state explicitly when they are about an expected event coming to pass.

When I say this news was unsurprising, here is what I mean. This headline was published on a Friday morning; around midday Thursday, the Minnesota Department of Health announced that at least one person with the omicron variant had been in New York City immediately before showing symptoms. Shortly thereafter, NYC mayor Bill de Blasio put out a press release stating that “we should assume there is community spread of the variant in our city.”

Compare one alternative possibility: “Omicron found in city, as expected.”

What is this image doing? Yes, it’s iconic of New York City - but there are other cues that tell readers which city the story is about. And unlike the ravages of extreme storms, as Q. Pheevr points out, the virus is presumably not visible in the picture. Nor can buildings get COVID, as Daniel Ginsberg reminds us.

Through intertextuality, skyscrapers as a metonym for New York remind us of the September 11, 2001 attacks on the World Trade Center. COVID, then, is massive, presumably foreign, and “hits” on the scale of an entire city.

The combination of the headline and image imply particular types of solution. After the 9/11 attacks, New York went after the “invisible, foreign enemy among us” through an discriminatory profiling and surveillance program. The country as a whole responded by tightening border security and immigration.

Who, or what, would be the target of a similar policy in this case? Race is notably invisible on this cover. There are no people shown in the image, and no mention of any racial or geographic group. But omicron had already been racialized by virtue of its initial detection in South Africa, although it later turned out that the virus was present in both Europe and the United States before it was first sequenced.

Of course, this single cover does not make a definitive push in any particular direction. But the intertextual linkages to 9/11 and the covert racialization of the variant are suggestive.

Both the smaller size and their visual placement below the headline marks the two big bullet points as secondary information. They read:


The first bullet point tells readers more specifically where the variant has been detected. Queens and Brooklyn are two of New York City’s five boroughs, and Suffolk County is one of the two counties that comprise Long Island. A considerable percentage of Long Island residents commute into NYC on a daily basis.

The second bullet is more interesting from the discourse analytic point of view. Its position sequentially tells the reader that ‘don’t panic’ means more specifically not to panic about this news. And ‘test & vaccinate’ offers a different proposed solution, one that follows the preferred U.S. framing of personal choice, despite its ineffectiveness, even counterproductivity.

Why is ‘Don’t panic — test & vaccinate’ attributed at all? In general, journalists attribute statements to limit their own epistemic commitment. Quotations are not asserted by the reporter; they rely instead on the authority of the person who spoke them. That also means that as soon as a journalist frames a statement as a quote, the journalist is freeing themself from truth claims about the content of that statement. This is particularly true of quotations from politicians. And in this case, the solution proposed within the quote contrasts with the solution implied by the headline and associated imagery.

Why is “Don’t panic — test & vaccinate” attributed to President Biden, rather than Governor Hochul or Mayor de Blasio, both of whom made similar comments? Hochul and de Blasio’s comments were specifically about the variant’s presence in New York, rather than in the United States as a whole. The structure suggests criticism of the politician, by contrast with the (deliberately) panic-inducing structure of the headline. And that may give us a clue: the headline implies that what’s needed are solutions at a national scale, and this bullet critiques the response of a national politician.

Last but not least, the contrast between the implied policy move of border control with Biden’s proposal to increase testing and vaccination leaves many other potential policies off the table entirely. These include mask mandates, free mask distribution, paid leave and improved quarantine infrastructure, lifting patents on vaccines, non-essential closures or remote work mandates, and so on.

The tiny text in the corner of the photo reads: “As of Thursday night, five cases of the omicron COVID variant had been reported in New York State, with three cases in the city.” In some ways, this is key journalistic information. All the basic information the public needs is encapsulated in this one sentence.

But what is most notable is the font size, which marks it as relatively unimportant. In doing so, it communicates a secondary message: informing the public is less important than the emotional and political impact of the primary headline.

In other words, the easiest way to understand the impossibility of ‘neutrality’ is to consider other possible, equally factual covers that did not appear. Imagine this small print blown up to headline size. Or a photo taken at an overwhelmed COVID testing facility. Or compare another local newspaper, The New York Post, whose Friday cover says nothing about COVID-19 at all. All of these choices will influence how you feel, and how you think, and what seems like a reasonable response.

The Nerdy Stuff: About Discourse Analysis


Discourse analysis isn’t a single approach but a family of related methods and frameworks to consider communication ‘ beyond the sentence.’ All these methods share an interest in the non-referential functions of language, the layers of meaning that go beyond describing a situation, object, mental state, or idea.

But on the page, spatial organization does the work of temporal sequence. So when discourse analysts look at physical text artifacts, like this cover page, we need to modify the question: Why that here? It also becomes clear that language alone doesn’t do all the communicative work. Analysts have to consider all of the symbolic resources used here: not just layout but fonts, images, and the like.

Indexicality & intertextuality Another set of key tools for discourse analysts are indexicality and intertextuality. Words, phrases, grammatical structures, and genres carry echoes from the past. They become associated with particular contexts and meanings - “ flavors” - that shape the interpretation of a text.

COVID-19NewsIdea Brewery
Join the Conversation
What did you think of this? How did you use it? Is there something else we should be thinking of?
Subscribe to our Newsletter
Featured New Bites
Black Lives Matter
By Knology
Publications at Knology
By Knology
Resource: Culturally Responsive Research
By Rupu Gupta et al.
Learning Workshops with Knology
By Knology
Support research that has a real world impact.
Donate