Recent research from Knology and PBS NewsHour looks at how journalists make use of numerical data when reporting on politics, the economy, science, and health-related developments—and makes recommendations for how to do it better.

The contemporary news landscape is full of numbers and numerical data. Whether it be economic news discussing interest rate hikes or stock prices, health-related stories detailing Covid-19 case counts and vaccination rates, or coverage of political developments conveying data from public opinion surveys, everyday media audiences face a deluge of statistical information. Operating under the assumption that numbers “speak for themselves,” journalists who include statistics in their reporting often do so because they think this makes their work more credible.

But is this the case? In our research, which was published in Journalism Practice, we posed two questions:

In connection with these questions, we inquired into the kinds of principles or ideas invoked in quantitatively dense reporting. For example, are news users being presented with comparisons—i.e., numbers showing change over time, or between different places, or between different groups of people? Does the numerical information they confront require an understanding of proportions and percentages, of sampling sizes, or of things like methodological error? Does it traffic in ideas such as variability, probability, or concentration? How quantitatively complex are the numbers-heavy stories people read, watch, and/or listen to, and how much knowledge is required to make sense of these?

For this study, we collected a representative sample of stories from across the US media landscape. February 18 and February 24, 2020, we scraped six stories a day from Google News, focusing on those covering developments in business, science, health, and politics. Some of the stories in our dataset were produced by media organizations with a nationwide reach—like CNN and the Associated Press (AP). Others came from local news outlets like FOX 5 Atlanta. Some of the stories we analyzed came from publications designed for a specialist audience—for example, Bloomberg News. Other stories appeared in general, all-purpose media sources like The New York Times. Some of our data comes from highly partisan publications like The Blaze, and some was produced by organizations without a clear political orientation. To ensure that public media was part of our dataset, we also collected three stories a day in the aforementioned content areas from the PBS NewsHour website.

As an illustration of these findings, consider a story published on February 22, 2020 by the AP. Offering an update on the COVID-19 pandemic (which was, not surprisingly, a frequent topic of discussion in the stories we collected) in South Korea, it began by noting how the country “reported an eight-fold jump in viral infections Saturday with more than 400 cases mostly linked to a church and a hospital.” 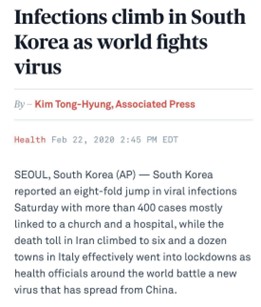 In pieces like this, the numbers actually are the story. And as its opening sentence shows, parsing these numbers requires an understanding of multiple quantitative concepts—among them magnitude and scale, proportions / percentages, and comparison (in this case, change over time). Without an explanation of these, it would be easy for readers to misinterpret the data. Even the use of case counts (i.e., the most basic information relayed here) is problematic, as it fails to include information about the number of people tested. Fortunately, since February, 2020, journalists have largely corrected this oversight. Nevertheless, the broader point still stands: *journalists often assume that numbers “speak for themselves.” *

Importantly, this assumption also informed reporting on other content areas. Consider a CNN business report entitled “American paychecks just aren’t getting bigger—unless you’re rich.” In one particularly jam-packed sentence, the report states that “wages at the 95th percentile grew by 4.5% last year, while the median increase was just 1%.” This quantitatively dense statement assumes familiarity with statistical terms like “median,” and also overlooks the fact that some readers might have trouble distinguishing percent increase from percentage point increase. 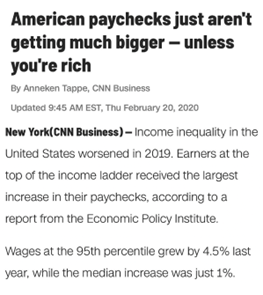 To be clear, not all news stories are as quantitatively dense as the above examples. Nevertheless, both pieces highlight a common feature of numbers-heavy reporting: the reluctance to provide audiences with the kinds of information needed to accurately understand numbers and statistics. Through our study, we learned that journalists often assume high levels of quantitative knowledge among their audiences. Such an assumption encourages them to take numbers for granted. And the result of this is reporting that is often incomprehensible and easily misinterpreted.

Let’s Put it to Work!

On the basis of our research, we’ve identified several things that journalists and media organizations can do right now to contribute to help the public better understand numbers and statistics. Our recommendations (which organizations like the Nieman Lab have already begun to disseminate) are as follows:

Photo by AbsolutVision on Unsplash

JournalismNormsNewsLearningBehaviorMedia
Join the Conversation
What did you think of this? How did you use it? Is there something else we should be thinking of?
Subscribe to our Newsletter
Featured New Bites
Black Lives Matter
By Knology
Publications at Knology
By Knology
Resource: Culturally Responsive Research
By Rupu Gupta et al.
Learning Workshops with Knology
By Knology
Talleres Educativos con Knology
By Knology
Support research that has a real world impact.
Donate