Numbers in the News

In this series, we’re looking into whether different ways of reporting on numbers improves either public understanding of statistics or judgments of news credibility

Can the news help you learn statistics? In this series of studies, we’re asking people to read, watch, or listen to one of two versions of a news report that contains numbers, visualizations, or both. Then we’re asking them a series of questions about the credibility of that news report, as well as some of the inferences they make .

The connection between learning statistics and credibility might not seem obvious, but it’s important. Journalists often use numbers and statistics to cultivate credibility among audiences. Simultaneously, audiences deem stories as more credible if they include more numbers, whether or not the numbers are reliable. In these cases, statistics give people a feeling of certainty about what they’re seeing. However, there can be a breakdown in this system when statistics are deceptive or inappropriately applied. If people have a clear understanding of statistics, they will be able to discern the difference between responsible and irresponsible uses and, by extension, identify which stories are credible and which should not be trusted. We are developing a model that connects all these pieces, shown in detail below.

In our study, we’re controlling for a number of demographic variables that might be related to how audiences perceive numbers in the news, including age, education, and political alignment. Since many of today’s most consequential numbers are related to the COVID-19 pandemic, whether about public health or economic consequences, we’re also controlling for people’s belief in conspiracy theories about the pandemic, following a Pew study on this topic.

With each test, we’re reflecting on the meaning of the results for journalists and other science communicators. We hope this series can help them use numbers and statistics in ways that build audiences’ reasoning skills.

You can find more about each test in the links below.

How the Tests Work

First, we show participants one of several versions of a news story or image, including the published version. Each of the results articles above outlines the specific changes we made to the stories

Next, we ask participants to assess their reactions to the news story. We also ask them to assess the social relevance of the story on different levels - the extent to which topic is relevant to “me,” “my family” up to society as a whole.These questions will be the same for all of the tests.

We then asked a bunch more questions to help us understand more about the participants. These questions looked at:


The Nitty Gritty: How We Analyze the Data

In our analysis, we’re treating the story version as the independent variable, reactions and estimates as dependent variables, and everything else is treated as covariates. Shown below is a hypothetical model showing the different factors that we believe influence how audiences respond to news, and the relationships between them. 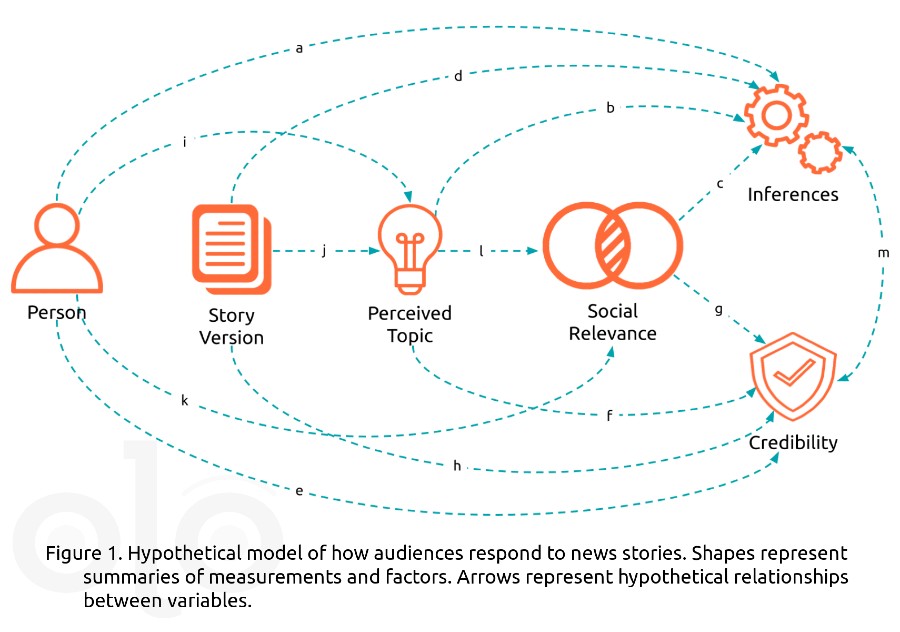 The icons in the figure represent some of the events, factors, and judgements involved in encountering and making sense of numbers in the news, and the paths (arrows) represent the relationships between those events, factors, and judgements. There are a few things to note about some of the icons used in the model. Person summarizes each individual’s demographics, political affinities, and other variables. Perceived Topic summarizes the results of applying a text mining algorithm to responses to the question “What is the topic featured in the excerpt?” Social relevance summarizes the assessments described above. Credibility summarizes participants' assessment of seven aspects of credibility. Finally, Inferences summarizes participants’ answers to quantitative reasoning questions.

To understand our hypotheses, follow the lettered paths. For example, arrow “a” shows that inferences may depend in part on the person, but that relationship also depends on what the person thinks the story is about (paths “i” to “b”) and the social relevance that the person assigns to the topic (paths “i” to “l” to “c”).

We simplify many of the demographic variables that are used in the analysis: We summarize gender and race/ethnicity in terms of privilege, comparing men and people who identified as white to those who selected other options. We categorize states by the level of restrictions in play at the time each survey is conducted, and collapse age and risk factors into a single risk variable for health-focused stories.

Want to hear more or have questions about the research? Let us know in the comments!

Photo by Crissy Jarvis on Unsplash

JournalismMediaNewsNormsLearningBehavior
Join the Conversation
What did you think of this? How did you use it? Is there something else we should be thinking of?
Subscribe to our Newsletter
Featured New Bites
Improving the Academic Journal Article
By Joseph de la Torre Dwyer
The Transforming Role of Public Libraries
By Beverly Sheppard et al.
Rethinking the Norms of Resilience Policymaking
By John Voiklis et al.
Support research that has a real world impact.
Donate